Birkhold & Maider LLC is an experienced Union City NJ area Personal Injury Law Firm. It’s important to have experienced legal representation before facing the Hudson County NJ court system. As personal injury lawyers, Birkhold & Maider represent their clients in cases involving accidents caused by the negligence of others. Birkhold & Maider is an advocate in recovery from accidents, offering to bring the right experts in to assist with building any case should it go to trial. The firm’s lawyers have a history for securing Union City resident clients the restitution they deserve. Reach out for a free case evaluation, call us at (973) 784-8630. 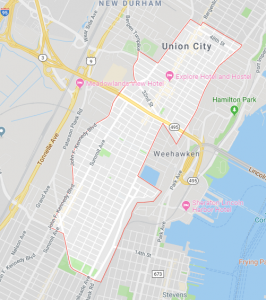 Union City is a Hudson County, New Jersey city with an approximate population of 66,500. Two major waves of immigration, first German then Spanish, greatly influenced the character of Union City. It also has two nicknames, “Embroidery Capital of the United States” and “Havana on the Hudson”, which reflect that immigrant history. In fact, thousands make a pilgrimage to Union City each year to see the annual Cuban Day Parade of New Jersey. The city is bordered to the north by West New York, west by North Bergen, east by Weehawken and West by Hoboken.