The City of Passaic NJ 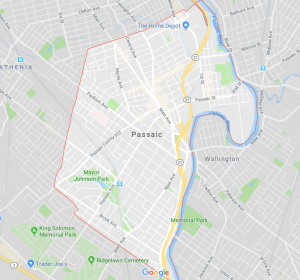 Passaic is a city in Passaic County, New Jersey with an approximate population of 70,000. It is the 15th largest municipality in NJ and also the 10th most densely populated municipality in the entire United States with 22,000+ people per square mile.Passaic’s only land border is with neighboring Clifton, which borders Passaic to the north, south, and west.  Passaic is located north of Newark on the Passaic River and it was first settled in 1678. The city and river both get their name from the Lenape word “pahsayèk”, which generally meant “valley”. Passaic’s interesting history includes its status as “The Birthplace of Television” based upon a local experimental television station that began transmitting via DeForest Radio Corporation in 1931. It is believed to be the first television station to transmit to the home.

Birkhold & Maider LLC is an experienced Passaic NJ Personal Injury Law Firm. It’s important to have experienced legal representation before entering the Passaic County NJ court system. As a personal injury law firm Birkhold & Maider represents its’ client in most types of accidents caused by the negligence of others. Birkhold & Maider is an advocate in recovery from an accident, while offering to bring the right experts in to assist in building any case should it go to trial. Birkhold & Maider LLC lawyers have a history for getting Passaic resident clients the restitution they deserve. Reach out for a free case evaluation at 89 Franklin Avenue, Suite 1, Nutley, NJ or by phone (973) 784-8630.